Central Independent School District traces its origin to five small schools that were located in the Pollok-Central area: Union, Durant, Pollok, Clawson and Allentown. An effort to solve the problem of inadequate funding for each of these rural schools, led to their consolidation in 1929 as the Central Consolidated Common School District.

A new brick building at this site greeted approximately 200 students in grades one through eleven when it opened in September 1929. With J.W. Dunn presiding as Superintendent, Central Consolidated began with nine teachers and had eight students in its first graduating class.

By providing a strong educational foundation and extra-curricular activities for students in the northwestern part of Angelina County, Central Consolidated has played a significant role in the County's educational history.

Today Central ISD consists of a Primary, Elementary, Junior High and High School that educate approximately 1600 area students. The District also has Career & Technology, Agriculture, Maintenance, Transportation and Administration buildings, an Outdoor Classroom facility and baseball and softball fields. Central has grown from 9 teachers and 5 graduates in 1929 to 128 teachers and 104 graduates in 2007. 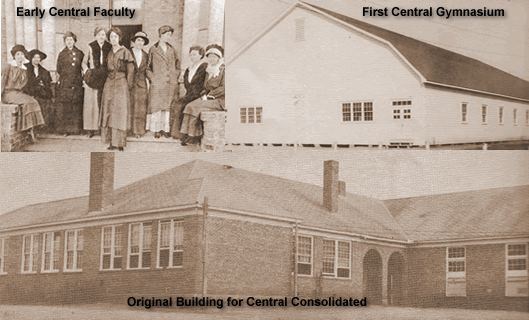